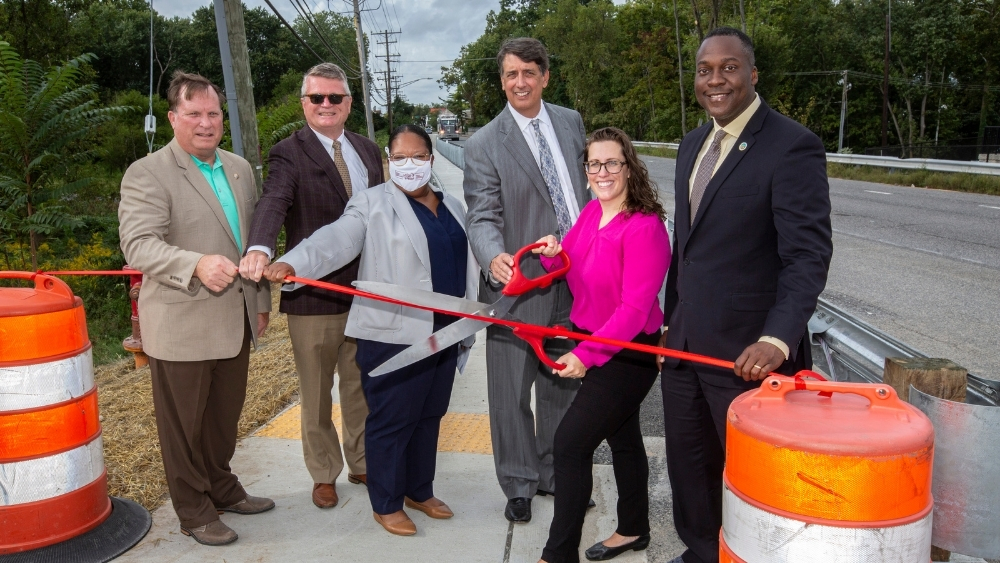 Paddock Pointe, a transformative master-planned community adjacent to the Maryland Jockey Club in North Laurel, opened a newly-constructed sidewalk along U.S. Route 1 on September 21, 2021. State, county, local officials, and community members were in attendance. Both physical and symbolic, the sidewalk connects Howard County to the City of Laurel and Prince George’s County, providing a safe pedestrian link.

“As a transit-oriented development, Paddock Pointe strives to improve connectivity within and around our community,” said Mark Thompson, Senior Vice President of Development for 1/ST Properties. “This is a concrete first step in the revitalization of North Laurel and the Route 1 Gateway into Howard County.”

Since breaking ground in 2019, Paddock Pointe has energized economic revitalization in North Laurel. To improve pedestrian safety and strengthen connections, Paddock Pointe added a sidewalk to a section of Route 1 northbound between the City of Laurel and the community entrance and redeveloped Laurel Park Boulevard between Route 1 northbound and southbound. The resulting enhancements include sidewalks, streetlights, landscaping, gutters, and storm drains.

“This connection between North Laurel and the City of Laurel has been sorely needed for many years to better connect businesses, residents, and communities together safely along Route 1. The sad truth is that too many residents in Howard County are put in danger every day simply due to the fact that our infrastructure was built exclusively for cars, and not for us,” explained Howard County Councilwoman of District 3 Christiana Rigby.

“One of the most important things we can remember to do as we develop and plan is we continue to talk and communicate amongst each other. Our goal is always the same, to bring communities together,” said City of Laurel Mayor Craig Moe. “This is a fine example of everybody working together from the state down to the local level.”

The installation of a sidewalk increases pedestrian safety and encourages walking and cycling between residences, businesses, and community amenities. It also improves social connections and commerce, leading to expanded services throughout the North Laurel community.